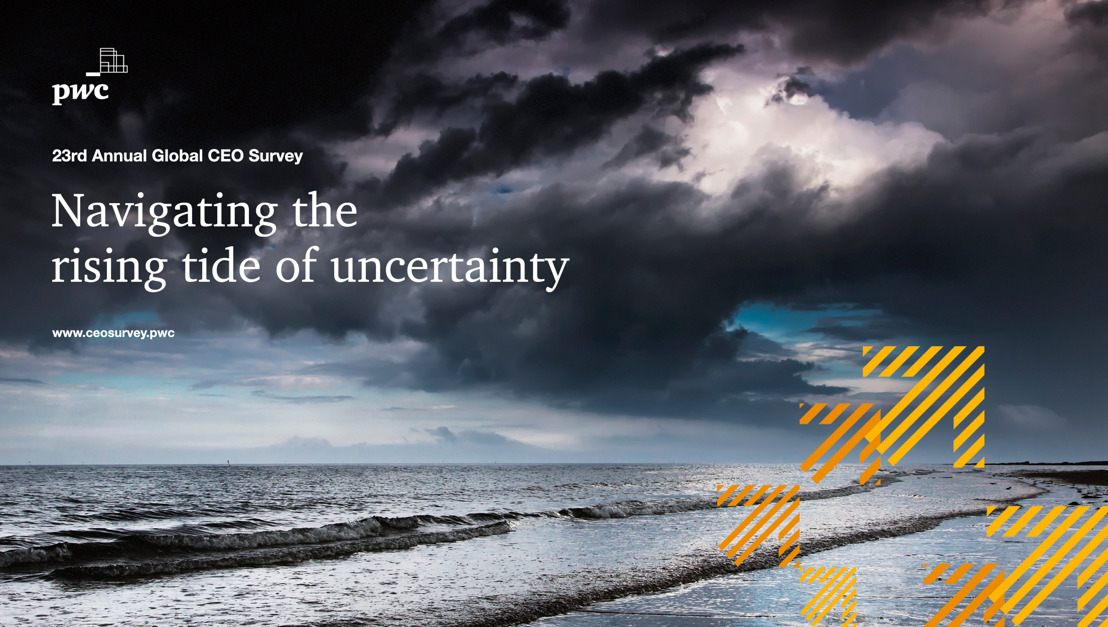 Monday, 20 January 2020 - This year saw a record level of Belgian CEOs believing economic growth will decline. With as many as 63% sharing this opinion, this is the highest level since 2012. Belgian business leaders are also showing more awareness for cyber threats, with almost one third of them expressing “extreme concern” about the issue.  This is shown by the CEO survey, surveying over 1,581 CEOs worldwide, including 41 Belgian CEOs, which was presented by PwC today at the annual meeting of the World Economic Forum in Davos.

Face to face with economic reality

Nearly two-thirds (63%) of Belgian CEOs predict a decline in global economic growth, which is 18 percent points higher compared to last year (45%). The turmoil over global economic growth is also dampening CEOs' confidence in their own organization's short-term prospects, with only 63% expressing confidence in their company's prospects for revenue growth over the next 12 months, a significant decrease compared to last year (76%). Their medium-term vision remains more or less unchanged: 81% are optimistic about their prospects for revenue growth in the next three years.

Over-regulation (37%) and policy uncertainty (34%) continue to concern CEOs. This was no different in 2018. What is striking, however, is that trade disputes (34%), uncertain economic growth (32%) and, for the first time, climate change (27%) are issues that threaten to jeopardise their growth prospects.

When it comes to threats to their own organisation, Belgian CEOs are most concerned about the availability of skills (41%), changing consumer behavior (34%) and cyber threats (29%).

Commenting on the survey findings, Axel Smits, Chairman of PwC Belgium said: “Business leaders have grown noticeably less positive about the global economy as a result of trade disputes and tense relations between major world powers. Climate change has also been high on the agenda of Belgian CEOs in the past year. However, The latest results of the survey show a loss of confidence which reinforces the already existing concerns about economic progress".

No less than 29% of Belgian CEOs are 'extremely concerned' about cyber threats. 71% even view cyber attacks as a threat to their organisation's growth prospects. Also the regulatory framework is a cause of concern: 80% are 'extremely concerned' about data privacy and cyber security regulations, which is remarkably higher than the global average of 54%.

Axel Smits, chairman of PwC Belgium: “Now that more and more security breaches and malware attacks are making headlines, it is not surprising that Belgian companies want to arm themselves. By 2020, cyber-attacks will be one of the inevitable threats that companies - both small businesses and multinationals - may face. It is encouraging to see that Belgian CEOs are paying more attention to what cyber security actually means. However, the economic growth depends heavily on trust: trust between companies and their customers, but also between people and technology, or between employers and employees. The increasing risk of cyber-attacks can seriously damage that trust”.